Checking out Cardiff’s young talent with somewhere_to in The Hayes, Cardiff city centre, on Tuesday…

Shannon gets recruited to sing

Empty buildings frustrate me, and it’s getting more common. While thousands of people are in need of housing, or community space, loads of it is being wasted, or hoarded. Squatted community centres like the Red and Black Umbrella, here in Cardiff, are one way people tackle this from the grassroots. There are also emerging projects like Capacity Bristolwhich aims to “legitimatise the temporary usage of space by artists.”

Livity, the “socially responsible communications” people, are doing things their way with somewhereto_, along with Channel 4 and the Legacy Trust. The aim is to match 16 to 25 year olds up with space they’ve been looking for to do anything from singing to running a community group or practising gymnastics.

Cardiff’s somewhereto_show off leg started off very quiet; no background music and no performers, but things eventually kicked off with Lloyd Daniels (he’s off X Factor) who did two covers. After that things were pretty much back-to-back with some performers who had been pre lined-up to play and some who had volunteered off the street, with a crowd gathering for each one. 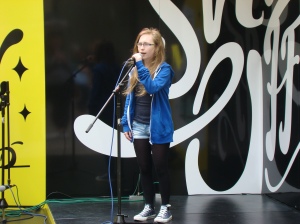 Ffion impressed with her voice

Performances were singer heavy, not quite the crazy array of Britain’s Got Talent style acts I was hoping for, but people like funky duo Twelve Strings and Ffion Edwards, who had to convince the Livity people that she was actually 16, and not younger, blew everyone away. Sam Hickman, the Joanna Newsom-esque harp player and singer covered Paloma Faith – she’s one of my favourite Cardiff buskers, locals can check her out singing near the Owain Glyndwr. For the boys, Shannon and Russell Jonesbrought out the retro rat pack voices, despite their fresh faces.

Fluidity Freerun satisfied my craving for acrobatics with their impressive parkour, Saeed brought out his motorbike noise impressions and Nathan Mizra did a touching but short spoken word performance. Other performances included the terribly named Ladies Love a Superherowho were a bit like a McFly for 2012 and gave Llyod Daniels a good run for his money singing wise. Didn’t get asked to have as many photos with teenage girls thought and sign as many flyers, all in good time though.

Hopefully this competition will go some way to raising awareness about somewhereto_ and underused space in general, and be more than just another talent show.

Cardiff was the last date of the tour but you can still submit video entries online until 16 July 2012.