When I woke up this morning I had a clear mission: to go to the supermarket and buy supplies for the next few days. I have £5 until the end of Friday but according to the Live Below The Line rules I can buy stuff at the beginning of the week to last. But I also didn’t want to get ahead of myself so didn’t want to max out my budget on the first day. 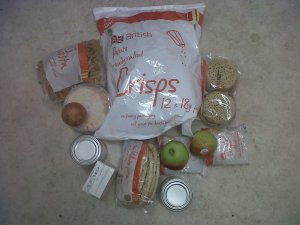 I quickly realised that this week was basically going to be sponsored by Sainsbury’s Basics range, and was not going to be that healthy. I did however manage quite a stash of food, and although it doesn’t look hugely appetising it will hopefully keep me full.

The first bug event of the day was meeting a couple of friends for a Bank Holiday Monday picnic. Straight away they offered to provide me with some food which I declined (a little grudgingly) saying I would bring my own. Lucky for me they came to South East London from the West and North where they live; I was glad to escape lots of cycle miles for the day and also thankful that I lived in an area with a nice park to tempt them with. The picnic was very enjoyable and I chowed down on my coleslaw sandwiches and actually felt quite full by the end of it.

Dinner was surprisingly OK too – pasta, onions fried in margarine and tinned tomatoes. I ate with my flatmate whose dinner smelled amazing, a lovely looking lentil curry with chapati, but apparently it actually tasted horrible due to copious amounts of a disgusting smelling spice called asafoetida that she was accidentally too liberal with. She was actually a bit jealous of me…that is until she stewed up some rhubarb for pudding.

An early night is called for I think as tomorrow comes the big test: First day back at work after a break for Easter, I am going to have to avoid my usual coffee and chocolate cravings and resist and biscuits or cakes that pass under my nose. Luckily, as I work at Christian Aid’s head office, a lot of my colleagues will be joining me on the challenge

Also, I am starting to panic a bit as my quest for free transport means I will be cycling to work everyday as well as anywhere else I need to go and I am far from fit. Got a few things on tomorrow too so will be covering a fair few London miles. This should be interesting.

Breakfast – apple and crumpet with margarine

If you have some spare cash and want to sponsor me, you can visit my fundraising page here